Video "Mountains of Arkhyz" taken during a hike in the mountains

Attention! Services: the organization and carrying out of hikes in the mountains of Arkhyz ( Republic of Karachaevo-Cherkessia, north-western Caucasus in south-western Russia). The conductors in the mountains (experienced instructors), meeting at the airport, railway station Krasnodar, transport services - transportation, transfers to the mountains by minibus Gazel, return shipping tourists after the hike.

When I decided to tell you about the trip in Arkhyz (Russia), I posted in the beginning of his article, this video. The authors - Paul and Kungurov Pavel Egorov from Moscow, were members of one of our hikes, which was held a few years ago. Beyond the usual tourist backpack, following the trail of these guys are still carrying a camera, extra cargo in the form of a special tripod and set of lenses. Note that at the time when other participants of a hike in the mountains just vacationing they had to go shooting the beautiful nature of the mountains, even at night they filmed the sky in the mountains of Arkhyz. So this "rest" in the mountains for some of our participants. Thanks to modern treatment, was born timelaps called "Arkhyz Mountains". After hard work, who starred a long time video sections seem fast, in just a few minutes and therefore it is possible to see how moving air currents, floating on the sky clouds and out of the fog with the coming of dawn in the mountains of Karachay-Cherkessia. Like the film as it is assembled from millions of photos, with the consequence that we can observe something unusual, even something like a fairy tale... 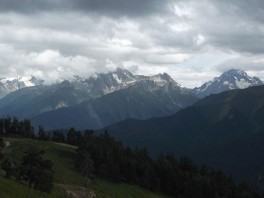 Our trekkers have witnessed stunningly beautiful Arkhyz, saw a mountain lake, growing on the slopes of beautiful flowers and plants, even met on his way the wild goats. During the hike the tourist group climbed above the clouds and even got high in the mountains under the snow!

Yes, Yes, it was under the snow going in the mountains in summer at the end of July and this is not surprising! Take this opportunity played in the snow, built a snowman... well, after a day of activities will be something to remember and tell your friends. And since high in the mountains is cold enough, then of course, they had to dress in warm clothes.

Don't do not need to stay on a bit of an unusual meeting in the mountains of Arkhyz homeless dog. One of the participants explained that this intelligent animal is attached to different groups of tourists and goes with them on hikes. A very interesting and clever dog, as it turned out, if You feed, then during her walks she will walk with You for a long time and protect You (see photo).

Stages of a hike in the mountains of Arkhyz. 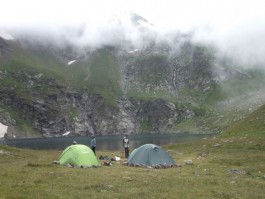 Next - how was the hike.
The trekking route in the mountains of Arkhyz began on a dirt road leading to "the Lunar glade", it will be possible to make out a first scheduled point the way - "pass Fedoseyev". Asphalt road from us is now relatively close, although several years ago the distance to it was much more. The fact is that due to the construction of ski resorts in the mountains, this distance is gradually reduced.
Breaking the clearing participants of the tour were waiting on the way parts of the forest, but then climb to a higher place has already become visible the top of the famous mountain of Sofia, the river offers beautiful views of the mountain ranges of the Caucasus.

Continuing movement in the direction of the pass "Symphony orchestra" and still not breaking his camp for rest and overnight stay in the mountains for the first time. A great opportunity to talk with each other, to share experiences from previous trips, just to get acquainted sitting around the campfire... In the process of communication engaged in cooking over a campfire. Soon views of the lake "Turya".
rock stones 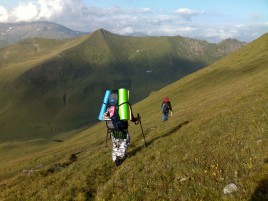 Rise early in the morning as usual, at 7 am after Breakfast we go on a stony rise to overcome the first on our way to the mountain pass. 2880 m above sea level is not such a small height for the first time participating in the March beginners!

On the top were made by a beautiful photo. Offer views of the Turia lake with stone ledges around. From this point we can see well the end of the next roll - pass Agur. Pesce go to him only about half an hour.

When they reached the pass Miguel, skirting on its way the small lake stopped. I Millwala (not up) roost.

Well rested the third day of the trip in Arkhyz begin with the lifting of Miguel and climbed to its summit down to the lake. Now we have possibility slowly to admire the largest lake of Arkhyz called Kafar.

On the third day we pass through the pass and down into the valley, which gradually overlooking the lake Kapar. Making a large number of video and photo images on the memory of the tourists go down the river Cafar to the place where it flows into the river Kusilchuk.

Then up to mountain lake and a little before reaching the pass Recepta trip participants get third night in the mountains. On the fourth day of the hike we have to overcome before us the pass Recepta and going to the valley of the river Arkhyz. Move now on a prolonged steep descent. 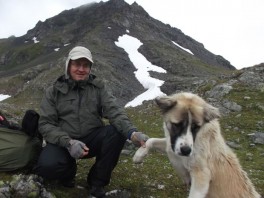 At the bottom of the hike goes on for some time along the river near by, and then the weary tourists stop to last overnight in the mountains, once again to rest and gain strength. The last time all participants will enjoy a long-awaited vacation in the evening around the campfire (after the second day of the trek the route is very Alpine meadows, where there are no trees, so firewood was not..). Now if weather conditions permit, there is even the possibility to organize a real field bath and, after bathing, to cool down in the cool water of a mountain stream!

The fifth day of the trek begins with our travel group comes up to the place where you can get to the vehicles and loaded into a minibus the Gazelle continues to move in the centre of the village Arhiz.
It is now time for everyone to buy Souvenirs, taste the local dishes of the Karachay - ayran and "hichina".

The final stage. Discussing past chances of a hike in the mountains of Arkhyz, the group head back to the departure point, the station, the city airport of Krasnodar of the Krasnodar region. We have many hours long trip.